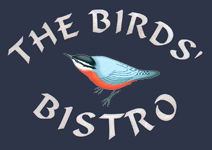 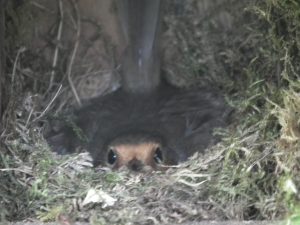 When choosing a nest box, it is important to consider what species will find it attractive as a potential nesting site. One with an aperture diameter of around 33mm is ideal as a general purpose one which will be used by all the tit species, while one around 28mm will be favoured by the Coal and Blue Tit but is a little small for the Great Tit. Open fronted boxes like the one in the photo are ideal   for Robins and Fly catchers. If you can, consider a box made out of Cedar which has better insulation qualities and will stand up to the weather .   The Birds’ Bistro staff will be happy to offer advice and guidance on nest box selection.

The box occupied by the Robins has been in place for 4 years without an occupant until this year which is a delay unknown before in the garden. I think the foliage needed to grow up around it a little more before the Robins considered it suitable. However a more open aspect box is often what attracts the Spotted Flycatcher. We had one nesting several times in an open fronted box on the side of the Potting Shed until the nest was robbed one year by unknown predators and I moved it.

About the Author: BB Orders